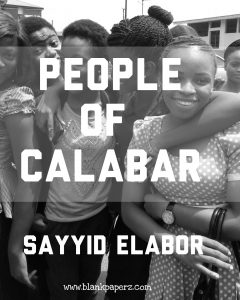 “In my JS2, I could not speak English. There were 2 other boys like me in my class who also couldn’t speak English; Raymond and James, and this made the English teacher to always call us names. He particularly liked to call us “3 idiots” which our classmates mocked us with. He smiled. In Shortly after our junior WAEC, the principal told everyone to write down their life goals. When the principal saw ours, she burst out laughing and even called the English teacher to look at the goal we wrote down:
“I WANTED TO BE RMEMBERED IN THIS SCHOOL BEFORE I LEAVE.”
His face had changed. Full of strong emotions and deep want to achieve. I wondered what had driven his goal. I adjusted in my seat and listened more keenly, magnetizing my thoughts towards his memories.
In our SS2, we wrote our MOCK exams. And out of 156 students, only 15 passed and we were among the 15 who passed. When our former English teacher saw this, we heard he used us as examples to the junior students that they should emulate us and be hardworking like we were. During the 3rd term of our SS2, prefects were chosen. My 2 friends and I were made prefects. James was the Senior Prefect [SP], I was the Sanitation Prefect and Raymond was the Labour Prefect.
In the 1st term of our SS3, we made some new rules that many students didn’t like. We discovered a bushy pathway students used to escape school and blocked it. This made many of our classmates very angry and were threatening to kill me so I had to change schools in the first term and only returned so I could register for my WAEC exams. On Graduation Day, James and I were called out for prizes and it was there I won my first laptop.”

Faith is a 19 year old boy who currently works as a salesperson tending a shop along unical road. He stares blankly into space, probably watching the old memories in his mind’s eye and ends by saying quietly, “I miss my friends.”