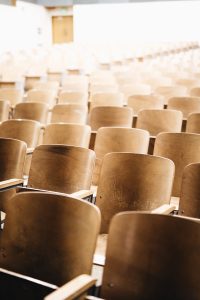 “I must admit, in my early days as a leader I was all about me. I had a title and I thought that was all I needed. I also thought because of my title everyone would automatically follow and respect me. Leadership wasn’t something I needed to work hard at. I felt I had already arrived.”

These were Peter’s thoughts to himself as he ate his toasted sandwich.

“So I can’t enjoy just another year of being the student president after all I did for them. They rather elect Joshua than a fine, intelligent and young spirited boy like me. I can’t wait to see what he brings to the table. And he better watch out because I, Peter Smith will make his leadership unbearable. He hasn’t seen anything yet.”

“What is it again this time around?”  Peter screamed.

“Oh I’m sorry if I got you upset by calling your name that loud but I’ve been waving my hands to catch your eye but to no avail. Well, Mr Steven needs your attention in the conference room.

“Please let him know I will be with him shortly.” Peter replied tersely as he walked back to his locker to get his back pack which was once carried around by his aides when he was the school president. Those were the days his name rang in the mouths of all the people on campus and even around campus, everyone wanted to be around him. People used to come with complaints that needed his attention but he ignored them because he thought that anyone who couldn’t afford to wear good clothes, drive expensive cars, or organize luxury sleepovers should not be found around him.

He remembered once when his right hand man had taken the keys to a certain Miss Jane’s locker and made her serve detention because she didn’t attend any class and was found loitering (when she was really distraught at the loss of her keys). Yet, when he was called upon to judge whether the keys were stolen or not, Peter said that his friend was only trying to keep it safe when he knew the truth. Just then it struck him that the same guy; his very own right hand man had already crested Joshua’s name on his hand  and  had been shouting down the hall way how Joshua was going to change everything.

Peter entered the conference room where Mr Steven was already seated and waiting for him.

‘Yes Peter grab a seat. Why did you take so much time to come? By the way your shirt is covered in sweat. Are the air conditioners in the hallway not working?’

‘They are cooling just fine. It’s just that I had to carry my back pack all the way with no help.’ Peter grumbled.

‘No help!’ Mr Steven exclaimed and laughed. ‘What did you expect? When the office is gone so are the amenities. It’s a new path you are going to walk my dear son and in this path you will learn to distinguish between being a part of a process and being a boss.’

Just then, Joshua walked in.

‘Hey! Joshua grab a seat too.’ Mr Steven gestured to an empty seat.

Mr Steven cleared his throat, looked at Peter than at the Joshua and began speaking in precise tones.

“On my way to represent the school at the conference organized by the educational board, my thoughts gave me no rest. Staring at my diary searching for what success story I was going to share on my leadership structure; a topic which had become so stale that no one wanted to associate themselves with, even though they were given millions of naira to speak at a conference. They would rather clean a house. I decided to have a short nap since nothing was coming to mind but in less than sixty seconds I was awaken by a loud sound. Raising my head, I prepared to scream at the driver who had not let his eyelids even blink when a teenage girl softly said Leadership revolves around attitude.

I asked her what she meant. And she said ‘I wish I had the opportunity to share in this conference I would have given them a piece of my mind. However, since I can’t, you can have my words. I peeped into your diary and I’m sure you are trying to prepare a sugar coated, applaud inducing speech for the conference. It wouldn’t be difficult if you had practiced being a leader.’

A sense of guilt pricked my mind, I wondered if she knew me from anywhere. Ten years of being a school principal yet no qualities to show for it. I had blocked my mind from Learning, Relearning, and Unlearning.

I would love to go on and on but for you my dear Joshua, this is a new slate, a whole new avenue you’re walking on. Before you direct others on the way to go, make sure that you have learnt the way and you’re also willing to go the way.

Mr Steven then looked at Peter, whose body was covered in goose bumps. He told him it is never to late to change. He implored him to forget about his former position and put more effort into being a catalyst for impact.

Joshua rose to his feet and made everyone join him as they pledged not only to be CEOs but Mentors as well.

Next article An Open Letter to President Muhammadu Buhari on Health, Education and Poverty