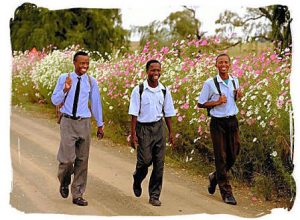 It was November 2010 in Christian High school Calabar. I was in ss3 planning to write my WASSCE which most people call WAEC.
I was an Art student whose love for government and history knew no bounds. I hate saying this but I must say it. I NEVER LIKED MATHEMATICS.
My school was known for its prowess in the Cowbell sponsored Mathematics Olympic competition. The B class which I belonged to never had time for such events. Though I never liked mathematics, I still knew some basics. Factorization, simplification and Pythagoras theorem( is it even theory) were the ones I could handle myself.
Our timetable in ss3 allocated 3 periods to mathematics on Mondays. Two in the morning and one during Prep in the afternoon.
We had mathematics again on Wednesday, Thursday and Friday.
Every Monday morning after devotion, in a bid to escape from Mr Ben and his Maths, I would hang around with my friends to catch late comers.
My class mates equally came late to school every Monday morning.
Unknown to us that Mr Ben was aware of how scanty his class always was. Don’t ask me how we used to pass our mathematics examination please. We had our LEGITIMATE MEANS of doing that (story for another day).

Mr Ben, on one hot November afternoon had planned with our government teacher to catch us. We were all seated waiting for our Government teacher to come into class. Some people were discussing among themselves while some were trying to get their notes up to date.
Mr Williams walked in with Mr Ben. You can only imagine the surprise look on his face. He asked if this is ss3b or another class.
In a few minutes, he explained to us that he was coming to build up our confidence level in solving any WORD PROBLEM.
He told us that he would write an equation on the board and everyone was expected to solve it.
Failure to solve it will result in lying down on the dusty terrazzo floor. As seniors, we took great pride in how neat our uniforms looked. Virtually every one had his clothes shaped.

Most of us would’ve preferred to be flogged than lying down.

I forgot to mention that I was a back bencher back then.

Those in front were lucky I’d say. They were to solve simple factorization. Some could solve it while others attempted.
The next topic he wrote was quadratic equation. I think it is the one you must use the ALMIGHTY FORMULA. My sit partner Roland lifted up his hands immediately. He took the chalk, rewrote the question and then ATTEMPTED TO SOLVE IT. I knew too well the trick he was using. I wanted to do the same thing but he was just quick. Mr Ben told him that he has tried and he should go to his seat.
The next thing I heard was NEXT. I stood up with no idea of what to do. I quietly left my seat to lie down. The whole class erupted into laughter. Mr Ben after laughing for about 2 minutes or thereabout, told me to stand up that he is DONE FOR THE DAY. Mr Ben never tried to BUILD CONFIDENCE in B class again.

Ekanem, according to Mirabelle, is an awesome, amazing, hardworking and illustrious historian with the heart of a diplomat. He’s a final year student of History and International Studies, UNICAL. In this poem, he takes us into the shoes of the poet persona, a young struggling Christian. This is what many secretly go through.

Next article This Is Nothing By Oshioke Asada