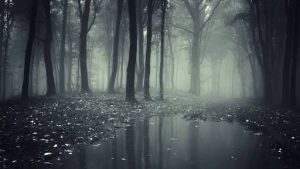 The stars dangled in the sky, casting silver shadows so that the night air glowed. It was cold. The villagers did not seem to mind. Children littered themselves in the open space: some danced, bathing in the moonlight, their bare feet sending red dust into a frenzy. The calmer ones sat, listening to Mma Obiageli as her words came to life in their timid minds. They would suddenly break out in a chorus at intervals, singing until veins protruded from the sides of their neck.

The hunters sat down under the mango tree. They sent sweet melodies from the Udu that diffused into the cold night. They sang epics; tales about the hunter and the hunted.

Anuli sat on a stool, at the entrance to her hut, her wrapper sagged around her chest so that the cold air splashed against the top of her breast. She could hear her mother’s voice as she told the children tales of worlds where spirits and humans lived together. She lowered her head. The baby spread herself on her laps, totally oblivious to the world around it. She sighed! She still felt pangs in between her legs but they were nothing compared to the ones she felt while she gave birth, some days ago. She moved until her back rested on the rough mud walls of the hut, gently so that she did not disturb the baby. She thought of the child’s brother.

The compound was mostly surrounded by thick forests that the night had turned into silhouettes. Deep in the forest, on the floor beds that had become cushioned with weeds and dead plants, lay an infant. The village basked in its frenzy, deliberately unconscious of the crying baby that had become food to ants, birds, and wild monkeys.