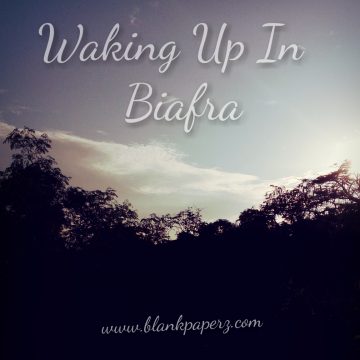 I wrote this story exactly when I was 16 and put it on my first blogspot account, as inspired by Chimamanda Adichie’s book,

Half Of A Yellow Sun.

I opened my eyes and there I was, standing in the middle of chaos. Disorder everywhere. People running Helterskelter, babies crying, women screaming. I wish I could say that I didn’t know what was happening but someone had already secretly whispered into my ears what was going on.
Amidst all the running, I met an old man under an almond tree. He let me pick up some almonds. I was afraid to pick them all, I wanted to leave some behind for the hungry people running for their lives as well .

Boom! I heard it. A few meters away from me, a house was on fire. Another Boom! And the nearby birds joined in the flight for safety.

In all the calamity I spotted Dike’s car parked along an untarred road.
I can’t remember how far I was from home. In fact, I’m not sure if I was still in my hometown. Dead people everywhere. Their bodies were like Zebras, only that their stripes were red. A deep nauseating red.
I knew the war was coming. I heard it was going to come someday, but I hadn’t expected it that soon.

He was running towards his car as I was doing same. We jumped in and he started the engine. We weren’t sure where we were driving to. All we knew was that we were driving, driving away from all the mess, if possible.
I looked through the windscreen, my heart slowly tearing apart.
I saw men and women with their luggage strapped to their backs and heads, running barefooted along the road. Many, already weary, stood by the roadside trying to wave down any passing car.
Dike drove speedily past them. His eyes were watery and red .
I could see the fear in his eyes. I knew his brilliant mind was processing a lot that moment.
The ride was a quiet one. Dike never asked how I found his car, he just drove.

Hours later as we sped through dusty roads and army checkpoints, I noticed how beautiful the evening sky was. Too beautiful for such an ugly day.
I sulked in my car seat, tightly shutting my eyes and deep within the very soul of my being, I wished that my country could be as peaceful as the evening sky.

Next article A Boubou For Momma